Introducing Royole – For Makers, Watchers and Everyone In-Between

They say the more things change, the more they stay the same. And whoever “they” is, as it turns out, they’re sometimes right. As technology advances, the things we desire it to do for us stay the same. Whether it’s help completing a task, expressing ourselves, or even just sitting back and being entertained, our basic interests aren’t changing. But the way we fulfill those interests are.

With that in mind, we’ve partnered with Royole to bring a selection of their innovative and interesting products to the Canadian market. From a smart notebook to a Head Mounted Display, they’re at the cutting edge of technology and with the first two products we’re distributing, they are clearly poised to become an incredibly important player in the marketplace.

The Royole RoWrite is a notepad that allows owners to write or sketch on regular paper, and have every pen stroke captured and sent to their iOS® or Android™ device through the free RoWrite App. From there, they can edit, enhance, erase and share their work with friends. They say “if it ain’t broke, don’t fix it” – but sometimes it turns out that something can need fixing without you even realizing it. That’s why we’re excited to have Royole’s RoWrite in the Curve portfolio. 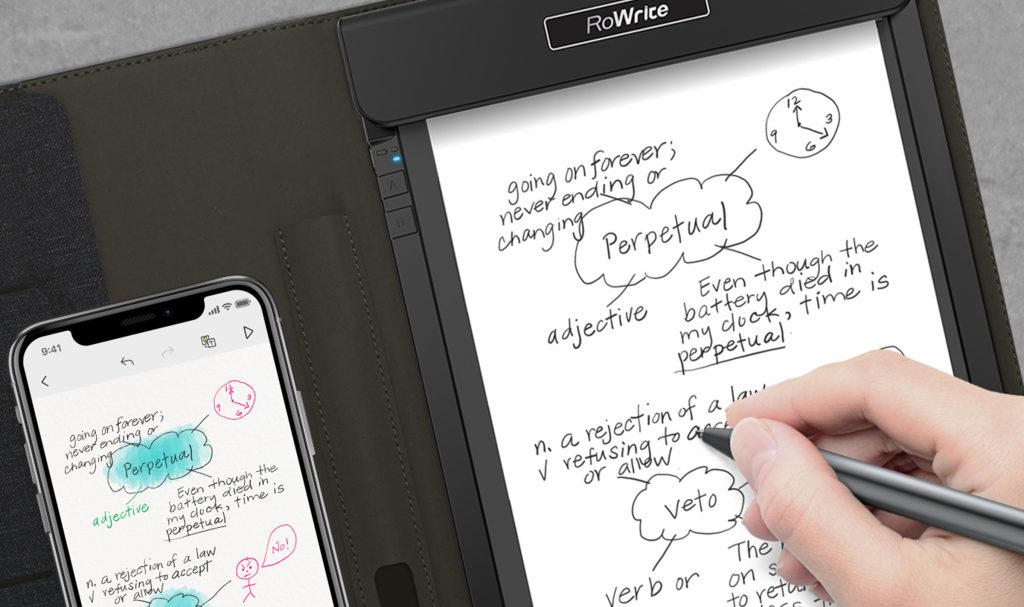 But not everyone is a creator – some want to sit back and immerse themselves into something. Increasingly that something is entertainment through a Head Mounted Display, which is a screen that wraps around the wearers eyes and puts them truly in the middle of the action. Last year over 22 million HMDs (short hand for you guessed it, Head Mounted Displays) were sold worldwide, and the trend is only growing. It’s predicted that by 2022 that number will almost double.

We’re willing to bet that a fair share of those headsets will be by Royole. Their Head Mounted Display, Moon, features a 1080p resolution display, foldable design for ultimate portability, unique operating system, Wi-Fi connectivity, HDMI and USB adapters which all make it one of the most well-equipped and versatile units you can get your hands on. It’s also compatible for use in airplanes, if you’re willing to be that guy wearing a Head Mounted Display set on an airplane (no judgement).

“Royole has a long history of being an innovator and a technology leader, and Curve is excited to get their products in the hands of the Canadian consumer.”

It’s clear to Kyle, and all of us at Curve that Royole is tapped into the marketplace, which is one of the reasons we’re so excited to add them to our National Brands portfolio. They understand the interesting dynamics of the modern consumer: how they want something tangible, yet digital, and how at the same time they are ready to accept the emerging Head Mounted Display technology. That’s our kind of brand, and it should be yours too.

Curve has experienced tremendous growth in the past few years. We’ve gone from a start up...

Another year, another incredible CES and a look at the consumer products that are going to change...

This year, at CES, we explored the latest in pet-tech for our faithful fidos and felines! Check-out...

It’s almost that time of year again – and we’re not talking about the holidays. We’re...

Apple’s last big charging-based announcement was magical – not because it was exciting, but...

Parenthood brings with it a massive amount of life changes that extend far beyond to the child...